How to Grow Vegetables: Celeriac Plants

Celeriac, scientific name Apium graveolens rapaceum, is a kind of celery usually grown as a root vegetable for its bulbous and large hypocotyl rather than for its leaves and stem.

It is also commonly referred to as turnip celery, celery root, or root celery. 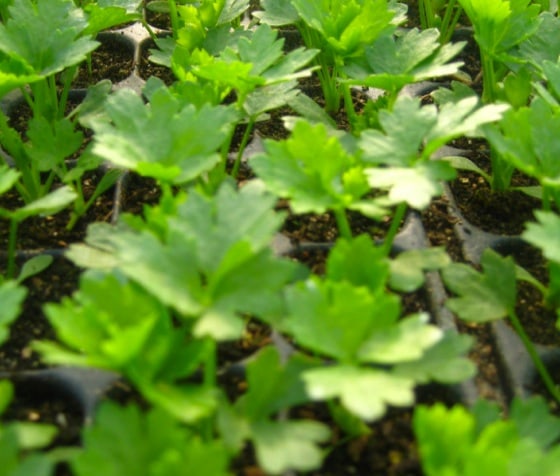 Its swollen hypocotyl is normally harvested when it reaches four to five inches (10-15 cm) in diameter, about the size of a typical large potato. Unlike most other root vegetables, which store huge amounts of starch, the Celeriac root is only about 5-6% starch by weight (A sweet potato is typically 80 to 90% starch by dry weight).

Culinary use and nutritional benefits

Celeriac can be eaten raw or cooked. It is normally sliced before use as it is too rough to peel.

It has a tough, furrowed, outer surface, which has the same celery flavor. It is often used in the flavoring stews and soups. It can also be eaten on its own, used in casseroles, in baked dishes gratins, or mashed. It can also be roasted like a potato; this gives it a nice crispy edge texture.

Celeriac is rich in vitamin C and also contains a good amount of potassium (helpful for reducing blood pressure and improving cardiac health). It is high in magnesium, calcium, and phosphorus and low in calories.

The above makes celeriac a great gardening choice. Although it can be somewhat challenging to grow most gardeners will benefit by planting it for the great culinary and nutritional rewards it can offer. It is the ideal crop to follow Peas or potatoes.

Celeriac grows best in a soil rich in organic matter. During April, add organic compost and manure to the soil and rake lightly. Allow two to three weeks before sowing the plants into the plot.

Celeriac prefers to be grown in full sun although it can tolerate growing in light shade. The soil should be well-drained, moisture-retentive, and as noted above rich in organic matter. Add additional aged compost to the planting beds again midseason. Since this vegetable is a heavy feeder, ensure plants are given a side dressing of compost tea every two or three weeks, especially during peak growing season. 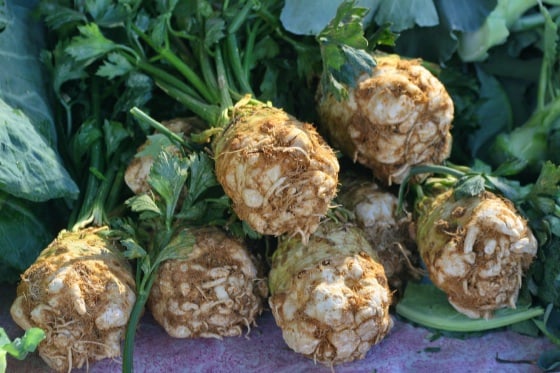 In warm-winter season regions, plant celeriac at the beginning of late summer so it can mature in cool weather; in cold-winter regions it is best to plant celeriac in early or mid-spring.

Celeriac is slow to germinate so is normally grown from transplants. Sow seeds indoors as early as 10 weeks before the last average frost date in your area, and transplant into the garden on the last date of frost.

It will require up to 120 days before it is ready to harvest. A late summer crop can be directly sown in the garden when there is enough time for a second harvest.

Sow celeriac seeds at around 1/3 inch deep (8.5 mm) and place burlap (Hessian) or a seed cloth over the seedling area to help maintain soil moisture until the plants sprout.

Celeriac is commonly set into the garden in three to four inch (7.5 – 10 cm) deep trenches. Just like when growing celery soil should be mounded around the exposed root as the plant grows.

Due to celeriac taking a long time to mature, gardeners often start the seeds indoors at least 10 weeks prior to the expected frost date. As soon as the seeds have sprouted, be sure to keep it in a relatively cool area that gets plenty of sun. The potting soil should be loose so that seeds can be planted under a light layer of soil; the seeds need light to properly germinate. Since celeriac is difficult to sprout, always sow more seeds than required.

Celeriac’s roots are fragile and grow close to the soil’s surface. This means that heavy digging and cultivating around the plants should be avoided. Weeds should be pulled by hand or use mulch to help prevent them. Water plants in a regular manner, especially when growing in a location with hot weather.

As part of Celeriac care snip away any extra side shoots and the lower leaves once the bulb has started to form.

Celeriac is prone to the same fungal diseases and insect pests as celery plants. Celery leaf miners are the biggest insect problem as they chew small tunnels and holes in the plant leaves. Treat the plants with insecticides, but since the sprays are not wholly effective against any insects inside the leaves it is better to remove the whole leaf instead if badly infected.

Fungus blight can also be a problem due to the amount of water that celeriac needs to grow. Blotches or brown spots will start to form on the stalks as well as in the leaves. Use fungicide to save the plants and pick off affected leaves slowly before applying the spray.

The top part of the celeriac root is seen above the ground making it easy to determine when it has reached its full growth size without the need to dig it up. Once the root reaches around three inches (7.5 cm) across, it can be harvested. Each plant produces a single bulb or root.

Celeriac is great for long-term storage as long as it is placed in a cool dark place. Depending on the temperature it will normally lasts for around three months.