How to Grow Mushrooms in Your Edibles Garden

Mushroom is the word used to describe different edible fungi and is thus not a true vegetable, nonetheless it is quite a popular food that can be fairly easily produced by gardeners.

It is known as the meat of the vegetable world, and there are several worldwide cuisines that use mushrooms in their cooking extensively such as Korean, Chinese, Japanese, European, and Asian dishes.

Most mushrooms readily available at the supermarkets are grown commercially on mushroom farms. Agaricus bisporus is the most popular edible mushroom; it is safe to be eaten by most people as it is cultivated in sterilized and controlled environments. Crimni, whites, and Portobello are some of the varieties of Agaricus bisporus that are successfully grown commercially.

There are numerous types of mushrooms that are available but make sure that you only grow edible ones if you once you decide to grow mushrooms in your garden for eating purposes; this will prevent any confusion with similar looking, but dangerous, fungi. Commonly eaten mushrooms include:

Mushrooms can grow in the garden but it requires a shady corner that is enriched with organic compost or well decayed manure that contains no weed killers or fungicides. Some mushrooms will require logs if grown outdoors.

It is much easier to set up a correct growing environment by cultivating them indoors in a dimly lit corner of a cellar or a shed with a fairly steady temperature of 50 to 55°F (10 – 13°C), use a lower temperature for Enoki mushrooms (45°F; 7°C). Due to the cold temperatures required it is usually easiest to grow mushrooms in the cooler months.

Use fresh, straw, damp manure as much as possible and mix them well. Pile it in a heap to generate heat and turn the heap over after a week. When the manure has lost its smell and it crumbly, it is ready to be used. Ready to use mushroom compost is also available from commercial grower or nursery.

Since mushrooms are fungus, they do not have the ability to grow like true plants. This means that growing mushrooms is far different from sowing plants. Mushrooms do not have seeds; instead they have microscopic spores that seem to be dust-like to the naked eye. It is more common to buy spawn rather than purchasing loose spores. Buying spawn comes in getting little plugs that were treated spores. Mushrooms will spring up within a few days and they tend to crop in flushes.

It is often the case that mushroom growing kits come provided with plenty of growing medium. This would have been previously inoculated with the spores making the mushroom planting process fairly simple. However as mushrooms require a large array of specific environmental conditions it is very important to follow the kit instructions. If you have not grown mushrooms before you may like to start with button mushrooms as these are comparatively easy to grow. 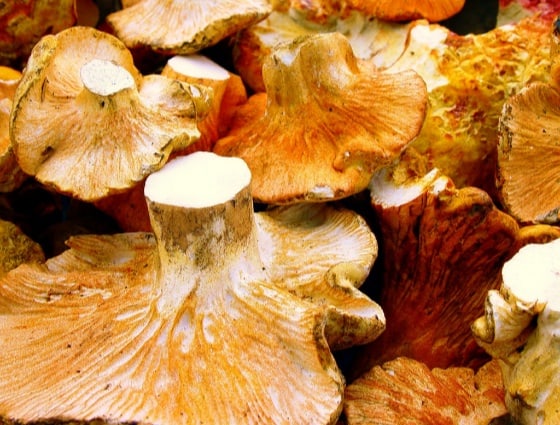 If you are planning to grow mushrooms outdoors, then select a damp and warm day in early autumn or late spring. Lift tiny squares of turf of about two inches (5 cm) thick spaced about 12 (30 cm) inches apart. Place a walnut-sized piece of mushroom spawn in every hole and afterwards, replace the turf.

The most effective way to raise mushrooms in containers is to wait until the heat of the day naturally decays the manure. Insert small pieces of mushroom spawn two inches (5 cm) deep into the compost but with nine to ten inch (22 – 25 cm) spaces between each piece. The spawn will begin to spread hyphae or fine threads in the box within a few days. The mycelium or the interwoven mate developed is the main part of the fungus.

Cover the compost with a layer of sterile soil ten days after planting to help retain the right temperature while preventing losing the soil’s moisture. Mushrooms normally appear eight to ten weeks after starting and will continuously be produced so for the next three months or so. Mushroom kits are already available in the market, which made it easier to grow these edible fungi at home.

Spray gently with water to maintain moisture in the growing medium, do not drench.

The larvae of numerous mushroom species can tunnel into the caps and stalks of mushrooms, which can make them inedible. Several mushroom diseases can also occur so it best to contact your nearest supplier or local garden center for specific advice.

Mushrooms are best eaten and cooked right after harvest. Be careful not to damage other mushrooms when picking them; it is easiest to use a sharp knife to cut at the base, or to press slightly into the soil and twist. Ideally harvest every day and eat fresh.

Mushrooms can also be stored in a paper bag placed in the refrigerator for a couple of days. Button mushrooms need to be harvested before the membrane between the stalk and cap start to separate.