Plants of the genus Boussingaultia are half hardy perennial climbers; they have recently been reclassified to the Anredera genus.

They typically flower at the end of summer or the beginning of autumn with small clustered white flowers.

Anredera are often referred to by the common name of Madeira Vine or Mignonette vine.

As they are climbers they should be grown on a trellis. These plants can grow uncontrollably and are considered an invasive pest in many areas so please be careful of your local conditions if considering growing this plant in your garden. 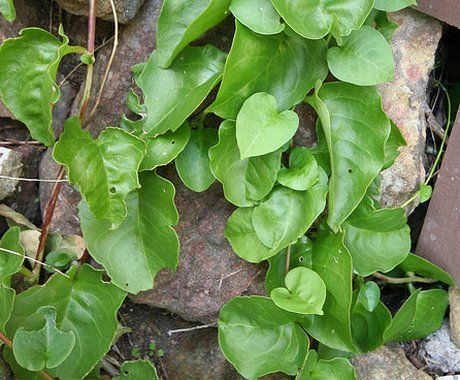 Common Names: Madeira Vine, Mignonette Vine
Life Cycle: Half hardy perennial.
Height: Up to twenty feet (6 M). Climbing vine.
Native: Americas.
Growing Region: Zones 9 to 10. Can survive in Zone 8.
Flowers: Late summer until early autumn.
Flower Details: Cream. Tiny. Clustered. Fragrant.
Foliage: Heart-shaped. Bright green. Shiny. Fleshy.
Sow Outside: The plant usually reproduces via tubers and rhizomes and rarely produces seeds.
Seed: Cover. Start of spring - before the last frost, or towards the end of autumn. Tuber: two inches (5 cm). Following the last frost. Spacing 24 to 36 inches (60 to 90 cm).
Sow Inside: Germination time: one month. Temperature 60°F (16°C). Seven or eight weeks in advance. Transplant outdoors following the last frost; temperature should not drop below 45°F (7°C).
Requirements: Full sunlight. Good drainage. Sandy soil, light soil, humus rich soil. Requires moist soil during the growing season, and dry soil in the dormant season. Provide trellis. In cold areas bring tubers indoors in the autumn and store in a frost free place. Cut back to half size in spring. Propagate: softwood cuttings at the start of winter, or root tubers in sand in the spring.
Miscellaneous: Boussingaultia is synonymous with the Anredera genus. Is considered an invasive species in many tropical and sub-tropical regions, and is not allowed to be cultivated or sold in New Zealand.

When growing Boussingaultia / Anredera directly outdoors it is best to sow seeds just below the surface and tubers at a depth of 5 cm in early spring before the last frost of winter. If planting indoors then Madeira Vine should be prepared about 7 weeks before putting out. They normally take about one month to germinate when kept at a temperature of 15 to 16 degrees Celsius. When transplanting Madeira vine outdoors they should be planted at about 60 to 80 cm apart after the last frost of spring, into a sunny part of the garden with light sandy humus rich soil.

Plants should be kept moist when growing, but the soil must be dry for the rest of the year. It may be required to cut back Madeira vines to the ground if they have suffered frost damage, otherwise cut them back by 50% every spring.