Learn How to Grow Jerusalem Artichokes in Your Garden

The Jerusalem artichoke, scientific name Helianthus tuberosus, is a species of sunflower native to eastern North America, it is also dominantly found in North Dakota, Texas, Florida, and Eastern Canada. Nowadays it is usually called by the name ‘Sunchokes’. It is a hardy perennial that is grown for its edible knobby tubers, which have a nutty flavor and can be eaten as a substitute for potatoes. 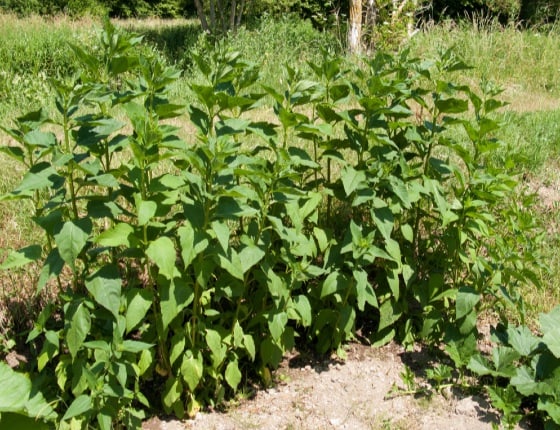 It is best cultivated in in temperate zones due its tubers, which are used as a root vegetable. The plant is also called sunchoke, sunroot, topinambour, or earth apple. It is an herbaceous perennial plant that can grow from four feet to nine feet (120 – 270 cm) high, with opposite leaves found on the stem’s lower part. Its leaves are larger on the lower stem and have a rough, hairy texture; they are broad ovoid-acute and are around 12 inches (30 cm) long. Higher leaves are narrower and smaller.

The plant bears yellow flowers that are normally around two to four inches (5 – 10 cm) in diameter and carry 10-20 ray florets. The plants have uneven and elongated tubers of around three to four (7 – 10 cm) inches long, and are one to two inches (2.5 – 5 cm) thick. Tubers vaguely resemble a ginger root that is thick and has a crisp texture when raw; colors are from red to purple, brown to white.

Unlike many other plants grown as vegetables, the hardy Jerusalem artichoke can be grown on nearly any site and in a wide range of soils, from loamy to cold heavy soils, whether open or shaded. This means that it can be grown globally, and indeed numerous gardeners include this in their list of garden vegetable plants to grow. Ideally dig in some compost to a well-drained soil of neutral pH.

Jerusalem artichoke is a useful crop for breaking in heavy soil and rough ground. The plant is typically used as a screen and planted in rows at two to three inches (5 –8) cm deep as windbreaks, and can be used to cast a heavy shade.

Although the plant prefers dry and sunny locations, it can also tolerate partial shade and any type of soil. However, when the plant is tall enough, one should consider stalking them to provide the sunchoke plant with protection against strong winds.

The soil needs to be very deep and loose to produce Jerusalem artichokes with bigger tubers. Hard soil around and beneath root crops can restrict their growth. Make sure that the soil is well-kept and weed-free.

Choose tubers that are about the size of a hen’s egg or simply cut the larger ones into two to three pieces, having a bud with each piece.

The best time to plant Jerusalem artichoke is from February to May (late winter to spring season). Plant four to six inches (10 – 15 cm) deep, spaced three feet (90 cm) apart. When the plants reach 40 inches (1 m) high, earth it up to increase its stability.

Cut off any flower-heads in mid-summer and trim back to five to six (12 – 15 cm) inches. Provide a seaweed fertilizer or any weak liquid feed to encourage tuber growth. Ties and stakes may be needed for extra support.

In autumn, when the leaves start to turn yellow, cut back stalks to three inches (7.5 cm) off the ground, leaving the stems lying over the stumps to protect from frost. Water well and apply a handful of weak fertilizer per plant. 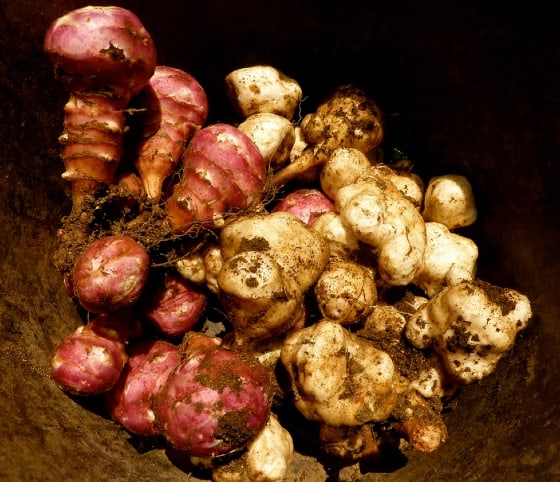 Jerusalem artichoke is one of the easiest plants to care for. Although plants can almost look after themselves, they can easily be blown over in open and windy areas. Once the plant reaches 12 inches (30 cm) high, draw up soil around the stems to help the roots secure the plant to the soil. Chop off the top one foot (30 cm) of the foliage when the plants reach six feet (180 cm) high, to help plants withstand any strong winds better.

Regular deep water will help to improve the size of the tubers.

As plants may become invasive to other parts of the garden you may wish to remove flower-heads before they set seed (this will also shift the plant’s energy from the flower to the roots, increasing their size and quality).

Plants have few major pests though Japanese beetles may leave a few holes in the leaves, this will seldom affect the plants ability to produce tubers, likewise not many diseases will have an impact upon plant growth.

Cut the back of the stem to around six inches (15 cm) high and place them on a compost heap. The tubers are stored in the ground, so simply dig up the roots as needed. Cooler temperatures will help to improve the flavor of the tubers, so it is best to harvest Jerusalem artichoke about two weeks after the last frost. The tubers may be about one foot (30 cm) deep, so use a small digging fork to loosen the soil and fell for the tubers using your hands.

In very cold locations, cover the soil above the roots with straw or bracken to lengthen the roots’ life. The roots can be stored in a cool dry place, avoid placing them on wet locations to avoid them from rotting. They will also keep quite well for two to three months in a fridge.