How to Grow Great Yucca Plants in the Garden

Everything you need to know about Growing and Caring for Yucca Plants such as Soapweed, Spanish Dagger, Spanish Bayonet, and Adam's needle

The Yucca Plant is a hardy or half-hardy perennial. The genus contains up to 50 species and these can range in height from 30 cm to 2.5 m (1 foot to 8 feet). 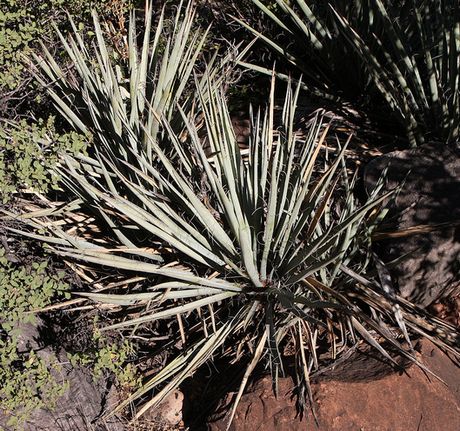 They bloom from the middle of summer through autumn, when they carry white flowers.

Some common names for the Yucca plant include Soapweed, Spanish Dagger, Spanish Bayonet and Adam's needle.

If you have children or pets it may not be a good idea to grow yucca plants in the garden, as they have razor sharp leaves that can easily hurt people and animals.

The following video gives an overview of this plant

Flowers: Middle of summer through to autumn.

Sow Inside: Germination time: one month to one year. Temperature: 65 to 75°F (18 to 24°C). Towards the end of winter or the start of spring. Grow seedlings indoors for two years. Transplant outdoors in the spring, once night-time temperatures do not fall below 45°F (7°C).

Requirements and Plant Care: Full sunlight. Good drainage. Can survive in dry and poor soils. Soil pH 5.5 to 7.5. Generally easy to care for but caution required: always wear protective, preferably chain mail or similar gloves when caring for Yucca Plants. Tidy leaves up to stop from becoming scruffy. Propagate: by planting offsets or from root cuttings.

Miscellaneous: Leaves can be very sharp, think seriously about the safety of children and animals before growing yucca in the garden. Yucca plants bloom at night. The plants have mutualistic relationship with the Yucca moth, which acts as a pollinator and lays eggs in the plant. Other Lepidoptera that are attractive to these plants include the Yucca, Ursine and Strecker’s Giant Skipper. Red Yucca (Hesperaloe parvifolia) is not a true yucca, but is actually a member of the Agave family.

How to Grow Yucca - An In-depth Look

Plants have large, stiff, and sword like rosette leaves, are a genus of perennial trees and shrubs from the family Asparagaceae, and are contained within the subfamily Agavoideae. 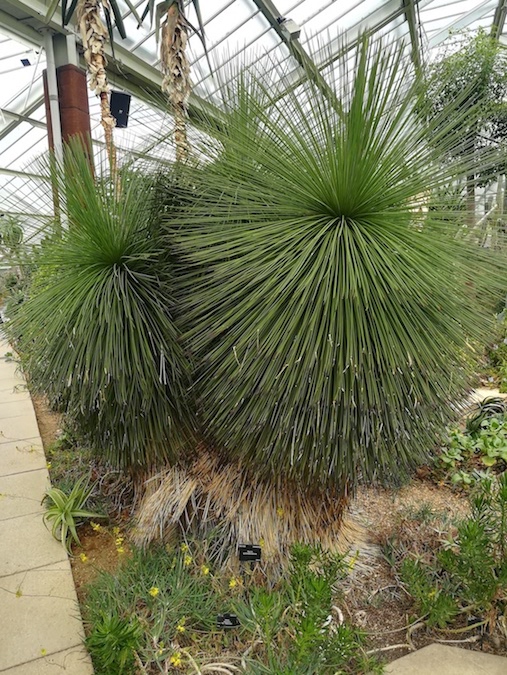 Plants are native to the dry and hot parts of South, Central and North America, and to the Caribbean.

They are currently one of the main gardening trends in the United Kingdom when it comes to landscaping and home garden plants.

There are nine species and 24 subspecies of Yucca, and their distribution covers a vast area of Central and North America.

Yuccas have adapted to a vast range of ecological and climatic conditions, as is demonstrated by its distributional spread from the Gulf of Mexico to the drier central states such in Alberta in Canada, and through to the inland neighboring states and the Atlantic coastal.

Plants are found in badlands and rocky deserts, in grassland and prairies, in light woodland, in mountainous regions, in semi-temperate and subtropical zones, and even in coastal sands (Yucca filamentosa); though these areas are generally arid to semi-arid. 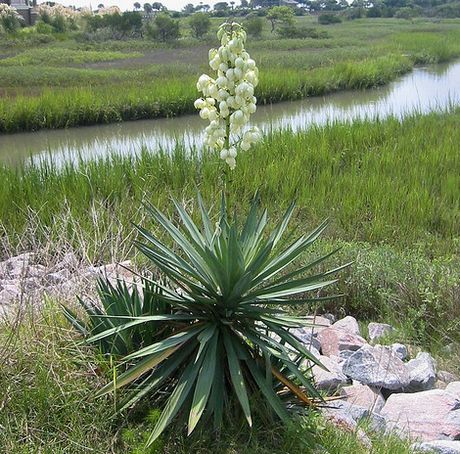 Photograph by Terren in Virginia.

Yuccas are generally known as ornamental plants in gardens.

There are also several yucca species that bear edible parts, such as their flowers, Young flower stalk, and flowering stem, seeds, fruits and roots.

The use of yucca roots as food often comes from the confusion with the same spelled, yet unrelated to yucca botanically, Manihot esculenta, commonly known as Cassava.

That said there are many yucca plant uses, for example: the roots of Yucca elata (soaptree yucca), are rich in saponins and are used in Native American rituals as a shampoo.

Trunk fibers and dried yucca leaves makes the plant perfect for use in fires that are started through fiction, as they have a low ignition temperature.

Species such as Yucca filamentosa, in rural Appalachian areas, are coined as “meat hangers”, as its sharp spiny tips and tough fibrous leaves are used in puncturing meat, as well as knotted in order to form a loop wherein meat can be hung in smoking houses, or for salt curing.

Yucca Pollination and its Relationship with Moths and Butterflies

The mutualistic pollination system of Yuccas is very specialized, as they are pollinated by the Yucca moths from the family Prodoxidae.

Yucca moths will transfer the pollen purposely from the stamen of one plant to the stigma of another plant, whilst laying eggs in the flower at the same time.

The moth larva will then feed on some of the developing seeds; there are more than enough seeds left to perpetuate the species. 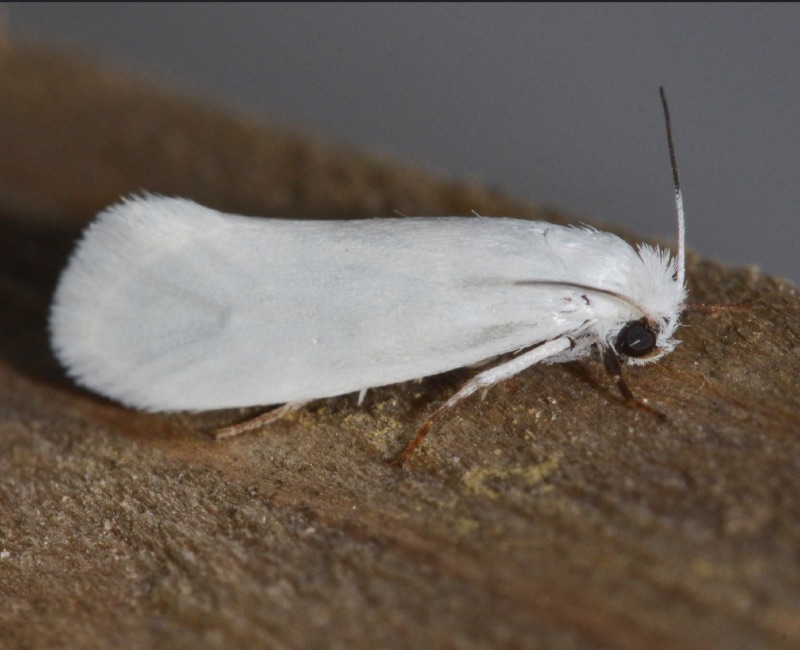 See this page for information on growing butterfly garden plants. 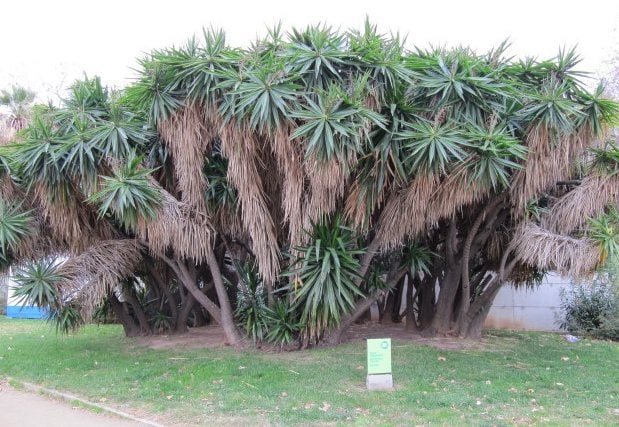 Some species, such as Yucca elephantipes, can have spreads of well over 6 M. Photograph by Wallygrom.

Yucca plants (shrubs variety) can be grown both indoors and out. Bigger varieties are planted outdoors whilst smaller ones can occupy spaces indoors.

They can also be planted in pots and containers as well as in garden beds, depending on what is available to the gardener.

Many people enjoy growing yucca plants indoors because they are low maintenance and have the ability to clean the air. They are also used as decorations to enhance a home and perhaps give it a Southwestern USA theme.

Choose a location that has access to full sun. Although Yuccas can tolerate partial shade, they grow best under full sunlight.

The soil should be somewhat dry and well-drained as the roots of Yuccas rot easily in wet soil.

If you want to grow Yucca tree from seed then it is best to first start indoors.

Yucca seeds take anything from one month to one year to germinate, and are best sown at the end of winter.

Germinate Yucca at 18 to 25 degrees centigrade (65 to 77°F) and initially grow them indoors for about three years.

It is best to keep Yucca indoors in a safe place if you have children or pets, but if required in the garden then transplant them outdoors a few weeks after the last chance of any frost in the spring.

Growing in Pots and Containers

Yuccas are not overly fond of pot cultivation, but they are usually fine when large pots are used.

Use a three liter rose pot for a young seedling up to three years of age. For older plants, use ten liter pots or bigger.

Make sure the growing spot is located to have access to full sun, as Yuccas planted indoors with limited light and root run often have a dwarfish look. Though this look is actually a desirable one for some indoor yucca species.

How to Grow Yucca Outdoors

It is probably easiest to purchase plants from a garden Centre or to plant Yucca from cuttings or offsets.

Ideally they should be grown in a sunny area that has a poor soil with excellent drainage, and a pH of 5.5 to 7.5.

Although some varieties can be grown unprotected, some beds need to be protected against winter moisture.

Species that can be grown in unprotected beds include Yucca glauca, Yucca filamentosa, Yucca 'Karlsruhensis', Yucca flaccida, Yucca angustissima ssp. kanabensis, and several hybrids such as Yucca 'Hybrid No. 1402' and 'Hybrid No. 500'.

The constructed beds must be raised so as to lean towards the sun, so that the plants get as much light as possible.

The usage of granite boulders is advisable to help raise the bed above the subsoil.

After digging a hole with the use of shovel to inspect the soil type, add small pebbled gravel or sand to implement the soil where the yucca is about to be planted.

To do this, dig a hole that is twice as deep and wide as the root ball of the yucca plant.

Put the extracted soil into a huge container or bucket, and add gravel or sand to the soil to make the planting bed 50 percent gravel/sand and 50 percent soil.

Placing some organic matter is beneficial; add more gravel or sand mixture if the soil has a heavy clay base to increase the drainage.

Place (5 to 8 cm (two to three inches) of the soil mixture into the bottom of the hole, and put the root ball of the Yucca plant on top of it.

Ensure that the plant is straight and centered. Fill in around the root ball with the remaining soil mixture until it reaches the soil surface level.

Gently press the soil to release any pockets of air. Sprinkle light water on the plant. Additional water can be added two to three weeks after planting.

How to care for a yucca plant

Outdoor Yucca plant care: Plants prefer dry soil that has full access to the sun. Avoid overwatering the plant as this can cause rotting of the roots.

Cut off all the dead leaves in order to keep the plant neat. Make sure to wear heavy gloves to prevent the leaves from cutting your hands.

Yuccas are not fond of being transplanted, so make sure that you will choose the right location before planting them.

A once a year feeding is sufficient as Yuccas survive well in areas of low nutrients and are light eaters.

Yucca plant care indoors: make sure that the plant has sufficient access to intense light. Use heavy pots as Yuccas tend to be heavy in both their stem and foliage.

When watering, simply sprinkle water on the top of the plant if the soil feels dry.

Although yuccas do not prefer to watered heavily, draught or lack of water can cause the leaves to turn brown or yellow. Other than pruning a Yucca plant it pretty much cares after itself.

Houseplants may require a low-nitrogen fertilizer a couple of times per year.

When grown outdoors, apply a time-release fertilizer in a circle around about where you expect the roots to be.

It is important to tidy plants regularly.

As they have very sharp foliage ensure that you wear protective chain mail or very tough gloves when doing any pruning or removal of yucca plants as they can easily cut off a finger!

Similar to many other plants, Yuccas are best pruned right before they enter the growth period, which is usually in early spring, though this period can be extended to the beginning of summer.

Cutting off the flower stalks after the blooms have faded is also necessary to ensure a tidy appearance.

With the use of a sharp cutters or pruning shears, cut the stalk off at about 7 to 10 cm (three to four inches) above where the stalk had emerged from the main stem.

Make sure that the plant receives a lot of light when it is recovering.

Propagation of Yucca Plant from Cuttings

When propagating it is important to use mature tissue (in order to prevent root rot), and to perform the propagation in the spring.

Cut off the leafy top after marking the trunk, remove all of the upper leaves, and then plant the trunk in potting soil with the end that formerly had the leaves pointing up.

Now relocate the pot to a shady area. The trunk is expected to have rooted itself within two to three weeks of planting, and will start to produce new leaves.

After a wet warm winter, rust fungus can occur. This can be prevented by protecting the plants against heavy winter moisture with the use of a sheet of glass.

Slugs and snails can wreck havoc to Yucca seedlings. Use common insecticide to get rid of these pests.

Red-orange spores or lesions of the leaves are indications of a fungal disease. The infected leaves must be removed immediately in order to prevent further spreading.

Speckling on the leaves, as well as gray webs, are signs of spotted mites. In order to control this infestation, use insecticidal soaps and prune dead leaves off the plant.