How to Grow Ornithogalum Plants

Ornithogalum Plants range from 10 cm to 60 cm (4 to 24 inches) in height and are usually grown as half hardy or hardy bulbs in the garden.

It is estimated that there are between 50 and 300 members in this genus, with the exact number being argued by the plant taxonomists.

Most plants are characterized by having star shaped flowers, linear basal leaves, and ovoid flower bulbs.

Ornithogalum make great plants to grow in a rockery, border, or containers and are at their best in the later months of spring at the start of summer.

They are very fragrant and do well in sun or light shade.

Beware that as these bulbous perennial plants produce offsets they are able to spread very quickly, with some species becoming invasive if not controlled properly.

It grows well in US zones 4 to 9, UK Hardiness H6. Leaves are strap-like. Plants bloom at the start of summer. Flowers are star shaped, white on the inside and green on the out.

The Ornithogalum dubium plant carries attractive brilliant orange, red, or yellow tepals with a flower center of brown or green. Plants reach about 12 to 20 inches (30 to 50 cm) in height, and leaves are narrow, lance-shaped, and yellow-green.

Ornithogalum dubium does well outdoors in zones 7 to 11 in areas that have excellent drainage.

It can make a good container plant in cooler areas if you bring it indoors for the winter.

It is frost tender and classed as Hardiness H2 for the UK and Europe, where it can be grown outdoors in the summer, but should be brought inside well before temperatures drop to freezing.

If growing in containers, then do not water through the winter, and repot in the spring before putting outdoors once temperatures have warmed up. Supply plenty of water during the growing season. 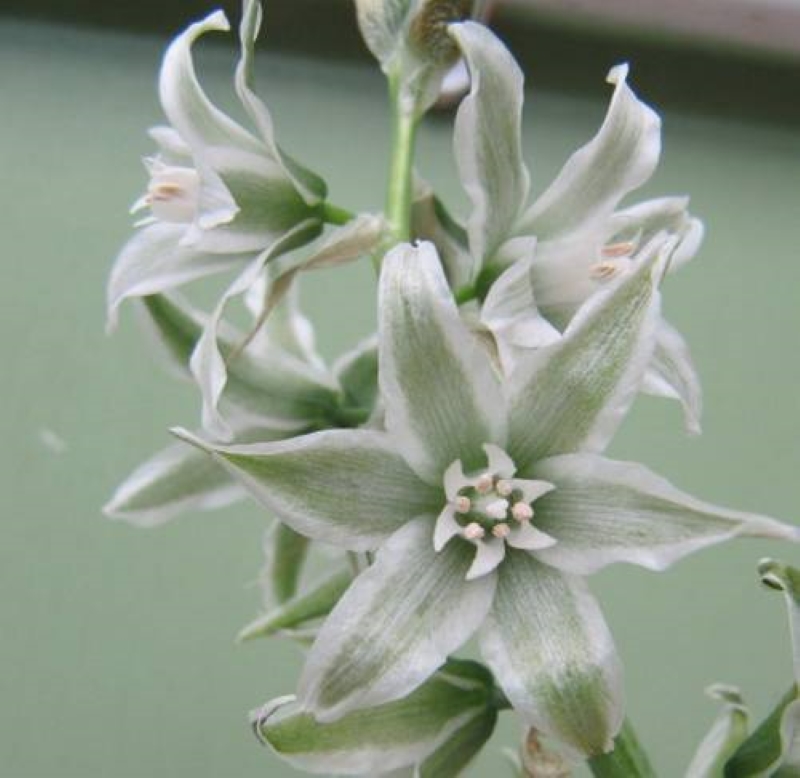 Ornithogalum nutans plants can reach 2 feet (60 cm) in height. The flowers are bell-shaped stars, striped green and white, and fragrant. Leaves are strapped with a central vein of silver.

This species is considered invasive in many areas, so check your local regulations before growing it. Full details on Growing Nodding Star of Bethlehem can be found here.

Commonly referred to as Chincherinchee or the Wonder Flower

Ornithogalum thyrsoides has conical spikes, each of which has about 30 cup-shaped flowers. These are white, but the center has a hint of green.

NB. When people think of Ornithogalum bethlehem they are usually looking for O. umbellatum or O. arabicum species: as O. bethlehem is not currently listed as a species.

How to Grow Star of Bethlehem

It is easiest to grow the Star of Bethlehem plant, Sun Star, and other Ornithogalumplants from bulbs.

These should be planted at from 7 to 15 cm (3 to 6 inches) deep in the Spring (for summer flowering), or in Autumn (for spring flowering).

Ornithogalum species are able to grow in both sunny and shady areas of the garden. It is important that they have good drainage.

If growing the Ornithogalum plant from seeds, then it is best to first sow in flats in the spring - lightly cover the seeds.

The flat should then be covered with a plastic bag. Next, place in the fridge for about three weeks.

The flat should next be sunk into the ground in a shady part of the garden and allowed to germinate. Plants can take anything from one to six months to germinate.

Once young seedlings appear, transplant them to their final location.

It should take about four years until Ornithogalum plants grown from seed will first bloom, but the pleasure from growing from seeds is well worth the wait.

Caring for Star of Bethlehem and other Ornithogalum plants

They should be fertilized in April by mixing manure into the soil. They will also require light fertilizing until the end of the summer.

Once established Ornithogalum may encroach, so weed as appropriate.

I hope that you found this guide on how to grow grow Ornithogalum plants in your garden. You may also enjoy my gardening guides on how to grow Rosemary, Pardancanda, and Carum plants.