How to Grow Cleome Plants in your Garden

Members of the Cleome Plant genus are half hardy annual and perennials that can reach from 90 cm to 1.2 m in height. Other names for members of this genus include Spider Flower and African Cabbage. They flower from summer to late in the autumn and have pink, white or purple spiky flower heads.

The Cleome genus is also referred to as being the Spider Flower Genus. It includes about 170 species. These largely consist of Perennial plants, though there are also quite a few shrubs and annuals in the genus. As it is a native to the subtropical regions of the world it is also often grown as an annual by gardeners who live in more temperate regions. 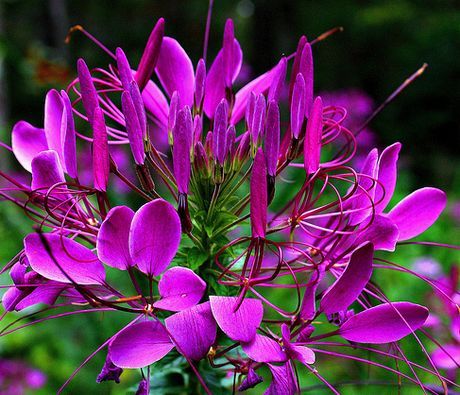 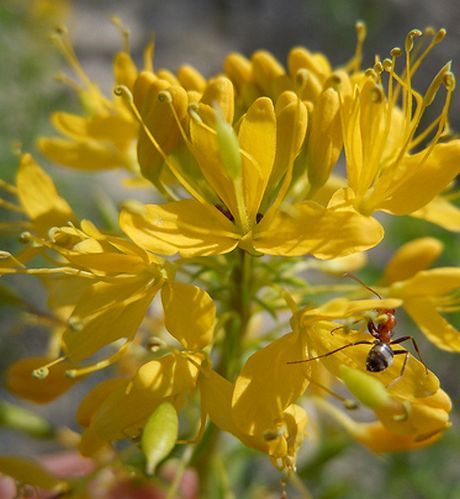 It is a very interesting genus of plants scientifically as it seems to be an evolutionary step between the C3 and C4 photosynthesis classes. It is speculated that three members of the Cleome genus (C. gynandra; C. oxalidea; and C. angustifolia ) were able to acquire the ability of C4 (NAD-malic enzyme) photosynthesis independently.

Cleome hassleriana (Spider Flower Cleome) are grown for their attractive leaves (palmate) and racemes of four- petalled pink flowers. The species Cleome gynandra (Shona cabbage, Wild Spinach) is native to Africa and is often grown as a green vegetable. Both the leaves and shoots have culinary uses in Africa they are usually boiled and used in stews, while in Thailand they are fermented into a pickle. It is also thought that Cleome gynandra may have some medicinal use as its leaves are as strong antioxidant and may play a role in the support of inflammation.

Common Names: Spider Flower, Beeplant, African Cabbage, Bladderpod, Spider Plant, Spider Legs, Grandfathers Whiskers, Stinking Clover, Wild Spinach.
Life Cycle: Half hardy annual. Half hardy perennial.
Height: 12 to 30 inches (30 to 75 cm).
Native: Worldwide tropic and subtropical areas.
Growing Region: Perrenial zones 9 to 11, Zones 4 and up as an annual. UK Hardiness: H2 or as an annual.
Flowers: Summer to autumn.
Flower Details: Pink, violet, yellow, white. Spiky. Fragrant (fragrance is species dependent and is often feint, many do not find it pleasent).
Foliage: Dark green, black, bronze. Herbaceous. Ovate. Small thorns on the stem.
Sow Outside: Surface. Autumn for the following growing season, or in spring once the the danger of frost has passed in the spring. Spacing 16 to 24 inches (40 to 60 cm).
Sow Inside: Stratify seeds by putting in compost, moist soil, within a bag, and place in the fridge for two weeks. Germination time: nine days to two weeks. Temperature 70°F (21°C). Start about four to eight weeks before expected last frost. Transplant outdoors about three weeks after the last chance of frost, when minimum temperature does not drop below 41°F (5°C).
Requirements: Full sunlight or light shade. Soil pH 6 to 6.5. Ordinary soil. Light feed during vegetative growth. Regular watering.
Family:
Closely Related Species:
Miscellaneous: Great to grow where deers are a pest as they do not like the taste. Odorless ones can make a good cut flower.

How to Grow Spider flower and other Cleome

Cleome seeds grown outdoors should be sown on the surface in a partially shaded or sunny area of the garden. They can grow in most soils that have a pH of 6 to 7. When planning on growing spider flower seedlings indoors first, then the process should be started about one and a half months before you plan to put them out.

Germination takes about two weeks, but first seeds should be imbibed by placing the seeds (within soil) in a black bag, then placing in the fridge for two weeks. Seeds should then be sown out at a temperature of 21 to 24 Centigrade. Seedlings of Cleome should be planted out with a spacing of about 50 to 60 cm after the last frost of spring.

Plants of the Cleome genus are easy to look after. They should be fertilized and watered whilst growing. Remove seed pods before they have chance to shatter.