Avena grasses can be either hardy annuals or hardy perennials.

They tend to flower at the height of summer, and are commonly known as Common Oat, Wild Oat, Cat Plant, and Animated Oat.


Avena sativa by Amy B.

They have blue leaves, and blooms are usually green spikelets.

The Avena plant should be used as an emphasis plant for the garden, and can also be grown in containers.

The Avena genus contains up to 15 species, and is more commonly known as the Oats genus. It belongs to the Poaceae family of true grasses. Members of this widespread family are native to Europe, Asia and parts of North Africa.

Some of the Avena species that are cultivated as a food source are as follows:

Species of Avena that are commonly grown in gardens as ornamental grasses, include A. Sativa from the above and:

Did you know that the term 'corn' means 'local cereal grain'? Therefore the use of the word corn means different thing in different countries. In the country of Scotland, when someone refers to corn they mean Oats.

Did you know, number two: common oats (Avena sativa) are also known as 'Cat Grass' because cats love to eat them.

They contain many nutrients that are missing from the canine diet. Many people grow this plant in containers indoors for their house cats.

Many of the wild oats are considered to be an invasive species in the USA. They love to grow in farmers fields, and are able to out-compete many native grasses.

This annual species is a well known food crop, especially in Scotland where it is used to make porridge.

Oat Plants range in height from two to three feet (30 to 90 cm), and should be grown in full sunlight.

Sow Avena sativa seeds at a depth of ¼ inch (6 mm) in early spring.

The plants have green inconspicuous blooms and form spikelets.

Although a food plant, in the garden they are usually used for ornamental purposes. For best results water regularly.

These plants can be grown as part of a grouping, or as a container plant. 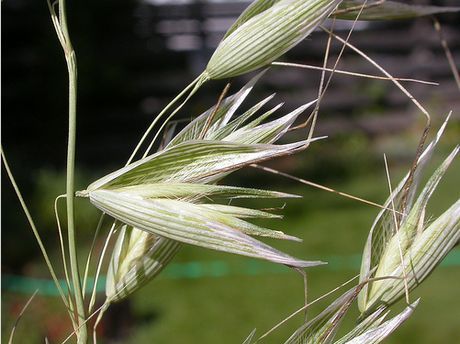 This annual species is native to Eurasia. In the Americas, it is considered weedy and invasive by many states. It is able to grow strongly and out-compete crops grown on prairies.

They have tall upright hollow stems that bear panicle inflorescence's that form spikelets.

For best results, grow plants in areas of full sunlight, they will bloom (inconspicuously) in the Summer.

To prevent spread, be sure to deadhead before they have chance to set seed.

How to grow Avena

Avena seeds should be sown outdoors, sow the seeds of oats at a depth of 6 mm (1/4 inch) from the beginning to middle of spring.

Avena should be planted in an area that receives full sunlight, in a dry soil with a pH of 6 to 7.5.

How to care for Avena

Avena species are easy to look after, they should be regularly watered (although they are pretty drought tolerant) for best growth. They can be left alone all year round.

Dried Avena make a very attractive plant to use in flower arrangements. Cut off the seed heads (and as much stem as you desire) once the seeds have developed. Dry upright indoors, this will produce dried oats that appear to droop naturally.

I hope that you enjoyed this guide on Avena. You may also enjoy the following Gardener's HQ growing guides: How to grow Lagurus, Ribbon Grass, Parnassia, and Eragrostis plants.